Four days of the PSi #22 conference ‘Performance Climates’ provided the impetus to monitor, record, and re-distribute interrelationships between the dramaturgy of conference organization, vectors of individual participation, circumstantial happenings, and microclimates of experience.  We were interested in undertaking score-based processes of collection and transformation in order to sample, remix, and re-release what may have been overheard, what may have escaped our awareness, what materialities might resonate, and what might be left unsaid.

Working with sound artist Simon Maisch, we created a daily process of gathering sound samples; arranging these into different layers or categories; transferring these to a pre-scripted process of transformation, as if thrown into a system of climate affects; and then releasing each Daily Hearing back into the atmosphere of the conference via online streaming access at 10pm each evening, offering a sonic reverie of the day, perhaps to fall asleep to.

The algorithm for the generation of each Daily Hearing took its input from a set of four folders or  layers into which we made daily deposits. How the sounds were transformed by the algorithm was determined by which folder each sound was located within. For us, each folder represented both a different temporal and spatial aspect of the ‘climate’ of ‘Performance Climates’:

Each of the Daily Hearings combines chance operations applied to each source file with an overall structure that creates a gradual progression by which, over 30 minutes, elements from ‘now time’ and ‘discursive time’ are subsumed within the sound-system, and elements from ‘circadian time’ and eventually ‘geological time’ slowly rise from the background to a more prominent role.  We thought of this as expanding the circle of listening from the local to the global, or from a spatial sense of nearness to spatial sense of farness, as listeners drift off to sleep.

The process enacted forms of call and response, uttering and listening, listening and re-listening, which became coincidentally amplified in the focus of Rebecca Schneider’s closing address to the conference on the last day.  Along the way, we made our own discoveries about the ‘atmospheres’ we were creating (informed by the daily conference themes), which led to choices such as only including sources that were spoken by the human voice in day 3, and, conversely, using a fragment from Schneider’s keynote (“and this, another call…”) as the primary discernible voice in day 4.

Theron Schmidt is a writer, teacher, and performer, currently working at UNSW Australia in Sydney.

Simon Maisch is an audio engineer, musician and sound artist in Melbourne. 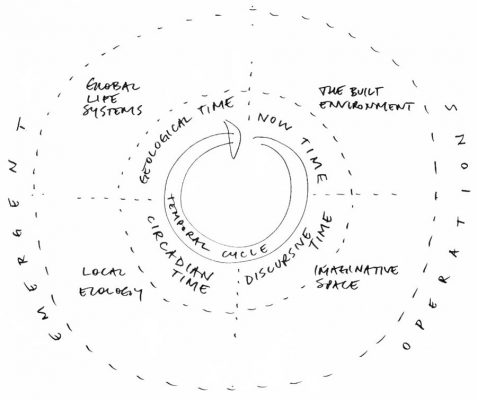